THE REAL COST IS IN NOT HAVING YOUR BURST PIPE REPAIRED:

Any burst water pipe damage will be much more expensive to fix and a lot more involved the longer you leave it. Slow leaking water damages your home in a very subtle way, often going unnoticed until it has caused major structural damage. The problem with burst pipes is that they don’t just produce water that floods your home, but they also allow water to soak into the carpeting, drywall and floorboards, meaning that it warps and stains wood and other materials, while allowing dangerous mould and mildew to form.

While most people think that it takes a lot of water to create a lot of damage in a room, the fact is that all it takes is a steady stream of water out of a pipe to start to cause damage to the wood and drywall around it. With this in mind, when you notice even a small bit of water leakage, you may have had a pipe burst and you need to call out a professional that specialises in burst pipe repair to come out and fix it.

Because life does not follow a schedule it is important to get out a professional as soon as you can to take care of the leak. This doesn’t mean that if it happens in the middle of the night you wait until the next morning, it means that you need to get an emergency service out in a matter of 30 minutes to an hour.

If you suspect there is a slow leak, calling out a licensed and experienced trade person early on is guaranteed to save you money and inconvenience down the track due to further burst water pipe damage. Finding the water supply for your home or business and shutting it off is a great step to take while waiting for us to arrive on site. Sometimes, only a small hole needs to be made in the walls to seal up a minor leak that was caused by an old bolt that needed replacing; other times, an entire wall is going to have to be opened up so that a length of pipe can be replaced. Whatever needs to be done, it needs to be done quickly and by a professional that knows what they are doing that will incur minimal onward costs to other contractors to replace the surrounding materials.

DON'T FRET IF YOUR SINK'S FLOODING

A burst pipe is a plumbing emergency! Water can quickly cause vast damage to your property. For fast, reliable and efficient emergency repair, call Sydney’s own Tai Irwin Plumbing so you can get back to your routine with the least disruption possible.
People are often worried about the threats to their home such as: house fires, burglary, gas leaks and wild storms. The truth is, water is a major threat to your home that most people don’t consider.

A burst water pipe can be really obvious and loud and sudden or can be a slow leak or crack in the pipe that gradually releases water. It is of utmost importance that the moment you notice the leak that the water is turned off at the source and that you call for help immediately. 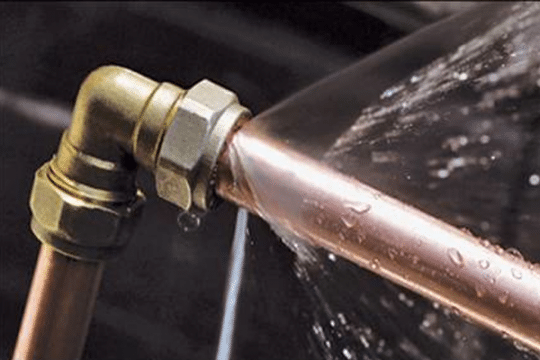 WHAT TO LOOK OUT FOR IF YOU SUSPECT A LEAKING PIPE:

There can be a lot of work that is required to ensure your home is safe and in good working order after burst pipe repair has taken place. Locating the origin of the leak and fixing it is the primary task and ensuring that the water has stopped escaping the pipe, then large fans are used to increase ventilation and dry out any residual moisture to make it a safe working environment to repair the surrounding materials damaged by the water leak. Other contractors are often involved in the replacing surrounding materials, depending on the scale of the damage.

A burst pipe is a plumbing emergency! Stop now and call Tai Irwin Plumbing for fast, reliable and efficient emergency repair so you can get back to your routine with the least disruption possible.